The periodic table shows all the elements and their physical properties; it is arranged based on atomic numbers and electron configurations.

The periodic table is structured as an 18 X 7 grid, positioned above a smaller double row of elements. The periodic table only lists chemical elements, and includes each isotope of each element within one cell. In the typical periodic table, each element is listed by its element symbol and atomic number. For example, “H” denotes hydrogen, “Li” denotes lithium, and so on. Most elements are represented by the first letter or first two letters of their English name, but there are some exceptions. Two notable exceptions include silver and mercury. The symbol for silver is “Ag” from Latin argentum, which means “gray” or “shining.” The symbol for mercury is “Hg” from the Latinized Greek hydrargyrum, which means “water-silver.” Many periodic tables include the full name of element as well and color-code the elements based on their phase at room temperature (solid, liquid, or gas). 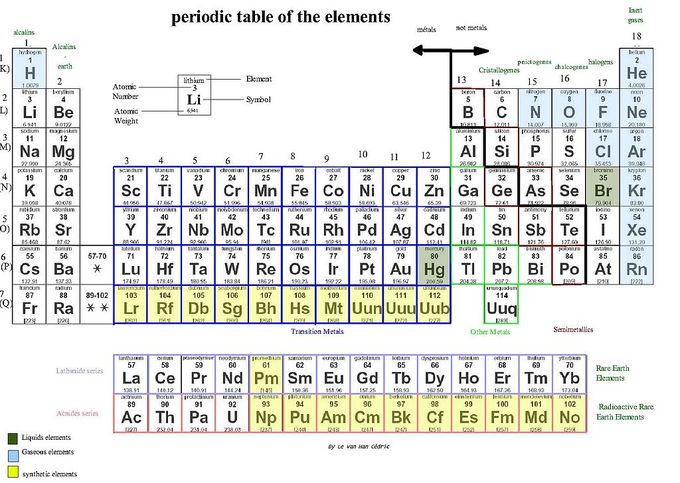 The element symbol is always almost accompanied by other information such as atomic number and atomic weight. Atomic number describes the number of protons in one atom of that element. For example, an atom of oxygen contains 8 protons. Elements are listed in order of increasing atomic number from left to right. Each row of the periodic table is called a period and each column of the periodic table is called a group (or family). Some groups have specific names like the halogens or noble gases. Elements within the same period or group have similar properties.

Chemical properties of each element are determined by the element’s electronic configuration, and particularly by its outermost valence electrons. An element’s location in the periodic table is largely dependent on its electrons; the number of valence shell electrons determines its group, and the type of orbital in which the valence electrons lie in determines the element’s block. In addition, the total number of electron shells an atom determines which period it belongs to. Because of its structure, the periodic table has become an extremely useful tool for assessing and predicting elemental and chemical trends.

Chemistry 3.1 Introduction to the Periodic Table – YouTube: An introduction to the periodic table which identifies metals,,nonmetals, and metalloids by location and compares and contrasts the physical properties of metals and nonmetals.

Molecules are electrically neutral compounds made of multiple atoms bound together by chemical bonds.

Recognize the general properties of molecules

An atom is defined as a basic unit of matter that contains a centralized dense nucleus surrounded by an electron cloud. When two or more atoms are held together by a chemical covalent bond, this new entity is known as a molecule. The word “molecule” is a loose term, and it colloquially carries different meanings across different fields of study. For example, the term “molecules” is used in the kinetic theory of gases, referring to any gaseous particle regardless of its composition.

Most often, the term “molecules” refers to multiple atoms; a molecule may be composed of a single chemical element, as with oxygen (O2), or of multiple elements, such as water (H2O). Molecules are neutral and carry no charge; this property distinguishes them from polyatomic ions, such as nitrate (NO3–). 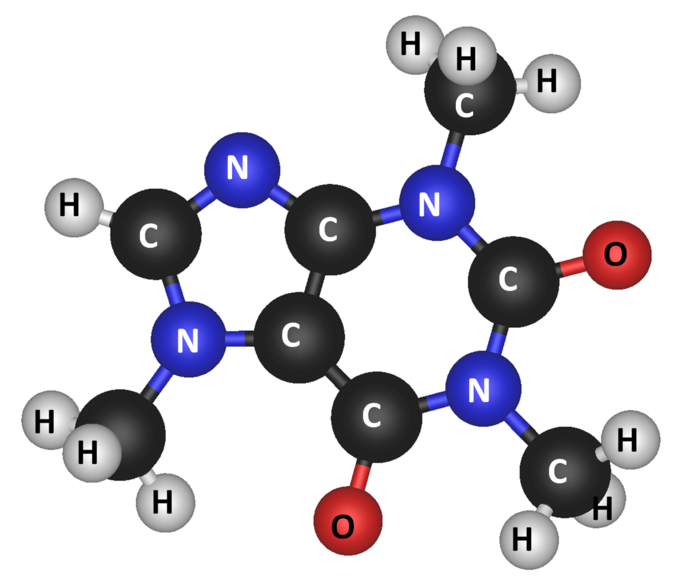 caffeine molecule: Caffeine is a complicated molecule, composed of many atoms bonded to each other in a specific arrangement.

Molecular size varies depending on the number of atoms that make up the molecule. Most molecules are too small to be seen with the naked eye. The smallest molecule is diatomic hydrogen (H2), with a bond length of 0.74 angstroms. Macromolecules are large molecules composed of smaller subunits; this term from biochemistry refers to nucleic acids, proteins, carbohydrates, and lipids. Some macromolecules may be observed by specialized microscopes.

Often, a compound ‘s composition can also be denoted by an empirical formula, which is the simplest integer ratio of its constituent chemical elements. However, this empirical formula does not always describe the specific molecule in question, since it provides only the ratio of its elements. The full elemental composition of a molecule can be precisely represented by its molecular formula, which indicates the exact number of atoms that are in the molecule.

Isomers are molecules with the same atoms in different geometric arrangements. Because of these different arrangements, isomers often have very different chemical and physical properties. In the picture below, 1-propanol is mostly used in the synthesis of other compounds and has a less offensive odor, whereas 2-propanol is the common household alcohol.

propanol structural isomers: The chemical formula for propanol (C3H7OH) describes several different molecules, which vary by the position of the alcohol (OH). Each molecule is a structural isomer of the other.

An ion is an atom or molecule that has a net electrical charge because its total number of electrons is not equal to its number of protons.

Compare the different classes of ions

Any atom or molecule with a net charge, either positive or negative, is known as an ion. An ion consisting of a single atom is a monoatomic ion; an ion consisting of two or more atoms is referred to as a polyatomic ion. The positive electric charge of a proton is equal in magnitude to the negative charge of an electron; therefore, the net electric charge of an ion is equal to its number of protons minus its number of electrons.

Ions are highly reactive species. They are generally found in a gaseous state and do not occur in abundance on Earth. Ions in the liquid or solid state are produced when salts interact with their solvents. They are repelled by like electric charges and are attracted to opposite charges.

There are specialized types of ions. Anions have more electrons than protons and so have a net negative charge. Cations have more protons than electrons and so have a net positive charge. Zwitterions are neutral and have both positive and negative charges at different locations throughout the molecule. Anions are generally larger than the parent molecule or atom, because the excess electrons repel each other and add to the physical size of the electron cloud. Cations are generally smaller than their parent atom or molecule due to the smaller size of their electron clouds.

Hydrogen ions: The relationship between a molecule, its cation, and its anion is shown.

An ion is denoted by writing its net negative charge in superscript immediately after the chemical structure for the atom/molecule. Conventionally the net charge is written with the magnitude before the sign; the magnitude of singly charged molecules/atoms is generally omitted. Monoatomic ions are sometimes also represented by Roman numerals, which designate the formal oxidation state of the element, whereas the superscripted numerals denote the net charge. For example, Fe2+ can be referred to as Fe(II). These representations can be thought of as equivalent for monoatomic ions, but the Roman numerals cannot be applied to polyatomic ions.

Ions can be formed by ionization, which is the process of a neutral atom losing or gaining electrons. Generally, the electrons are either added to or lost from the valence shell of an atom; the inner-shell electrons are more tightly bound to the positively charged nucleus and so do not participate in this type of chemical interaction.

Ionization generally involves a transfer of electrons between atoms or molecules. The process is motivated by the achievement of more stable electronic configurations, such as the octet rule, which states that most stable atoms and ions have eight electrons in their outermost (valence) shell. Polyatomic and molecular ions can also be formed, generally by gaining or losing elemental ions, such as H+, in neutral molecules. Polyatomic ions are generally very unstable and reactive.

Periodic Properties: Part 3, Ionic Radius, Predicting Ionic Charges – YouTube: A continuation of the discussion of periodic properties, including ionic radius and how to predict ionic charges.

The Periodic Table by Tulsa Community College is licensed under a Creative Commons Attribution 4.0 International License, except where otherwise noted.