A particle accelerator is a device that uses electromagnetic fields to propel charged particles to high speeds within well-defined beams.

Nuclear transmutation is the conversion of one chemical element or isotope into another. In other words, atoms of one element can be changed into atoms of another element by transmutation. This occurs either through nuclear reactions in which an outside particle reacts with a nucleus, which can be supplied by a particle accelerator, or through radioactive decay, where no outside particle is needed.

The term transmutation dates back to alchemy. Alchemists pursued the philosopher’s stone, capable of the transformation of base metals into gold. The impossibility of the metallic transmutation had been debated amongst alchemists, philosophers, and scientists since the Middle Ages. In the 18th century, Antoine Lavoisier replaced the alchemical theory of elements with the modern theory of chemical elements, and later John Dalton further developed the notion of atoms to explain various chemical processes. The disintegration of atoms is a distinct process involving much greater energies than could be achieved by alchemists.

Nuclear transmutation was first consciously applied to modern physics by Frederick Soddy when he, along with Ernest Rutherford, discovered that radioactive thorium was converting itself into radium in 1901. At the moment of realization, Soddy later recalled, he shouted out: “Rutherford, this is transmutation!” Rutherford snapped back, “For Christ’s sake, Soddy, don’t call it transmutation. They’ll have our heads off as alchemists.”

There are two basic classes of accelerators: electrostatic and oscillating field accelerators. Electrostatic accelerators use static electric fields to accelerate particles. A small-scale example of this class is the cathode ray tube in an ordinary, old television set. Other examples are the Cockcroft–Walton generator and the Van de Graaf generator. The achievable kinetic energy for particles in these devices is limited by electrical breakdown. Oscillating field accelerators, on the other hand, use radio frequency electromagnetic fields to circumvent the breakdown problem. This class, development for which started in the 1920’s, is the basis for all modern accelerator concepts and large-scale facilities. Rolf Widerøe, Gustav Ising, Leó Szilárd, Donald Kerst and Ernest Lawrence are considered pioneers of the field, conceiving and building the first operational linear particle accelerator, the betatron, and the cyclotron.

Since colliders can give evidence on the structure of the subatomic world, accelerators were commonly referred to as atom smashers in the 20th century. Despite the fact that most accelerators (with the exception of ion facilities) actually propel subatomic particles, the term persists in popular usage when referring to particle accelerators in general. 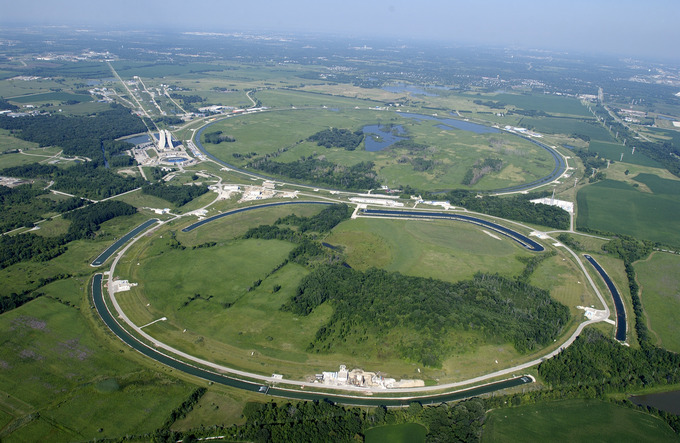 Fermi National Accelerator Laboratory: Aerial photo of the Tevatron at Fermilab, which resembles a figure eight. The main accelerator is the ring above; the one below (about half the diameter, despite appearances) is for preliminary acceleration, beam cooling and storage, etc.

Transuranium elements are those beyond uranium, none of which is stable because of radioactive decomposition.

In chemistry, transuranium elements, also known as transuranic elements, are the chemical elements with atomic numbers greater than 92, which is the atomic number of uranium. None of these elements is stable and each of them decays radioactively into other elements.

All of the elements with atomic numbers 1 to 92 can be found in nature and have stable or very long half-life isotopes. They can also be created as common products of the decay of uranium and thorium.

However, all of the elements with higher atomic numbers have been first discovered in the laboratory. Each of these elements is radioactive, with a half-life much shorter than the age of the Earth. So, if any atoms of these elements were ever present at the Earth’s formation, they have long since decayed.

Transuranium elements that can be found on Earth now are artificially-generated, synthetic elements made via nuclear reactors or particle accelerators. The half-lives of these elements show a general trend of decreasing as atomic numbers increase. However, there are exceptions, including dubnium and several isotopes of curium. Further anomalous elements in this series have been predicted by Glenn T. Seaborg. They are categorized as the “island of stability.”

Heavy transuranic elements are difficult and expensive to produce. Their prices go up rapidly with atomic number. As of 2008, weapons-grade plutonium cost around $4,000 per gram and californium cost $60,000,000 per gram. Due to production difficulties, none of the elements beyond californium has industrial applications, and of them, only einsteinium has ever been produced in macroscopic quantities.

Nuclear Transmutation by Tulsa Community College is licensed under a Creative Commons Attribution 4.0 International License, except where otherwise noted.