Discuss the history of the discovery of radiation

In 1896, the French physicist Antoine Henri Becquerel accidentally found that a uranium-rich mineral called pitchblende emitted invisible, penetrating rays that could darken a photographic plate enclosed in an opaque envelope. While working on phosphorescent materials, he happened to place the pitchblende on black paper that he had used to cover a piece of ﬁlm. When he looked more carefully, he noticed that the ﬁlm had lots of patches on it, and that this did not happen when other elements were placed on the paper. He eventually concluded that some rays must be coming out of the uranium crystals to produce this eﬀect.

This means that rays carry energy, but pitchblende emits them continuously without any energy input. This is an apparent violation of the law of conservation of energy. It was soon evident that Becquerel’s rays originated in the nuclei of the atoms.

The emission of these rays is called nuclear radioactivity, or simply radioactivity. The rays are called nuclear radiation. A nucleus that spontaneously destroys part of its mass to emit radiation is said to decay. A substance or object that emits nuclear radiation is said to be radioactive. Becquerel found radiation to be associated with certain elements, such as uranium. Uranium is radioactive whether it is in the form of an element or compound. In addition, radiation does not vary with temperature, pressure, or ionization state of the uranium atom. Since all of these factors affect electrons in an atom, the radiation cannot come from electron transitions, as atomic spectra do.

In 1898, Marie Curie began her doctoral study of Becquerel’s rays. She and her husband, Pierre, soon discovered two new radioactive elements, which she named polonium, after her native land of Poland, and radium, because it radiates. These two new elements filled holes in the periodic table and displayed much higher levels of radioactivity than uranium. Over four years, working under poor conditions and spending their own funds, the Curies processed more than a ton of uranium ore to isolate a mere gram of radium salt. 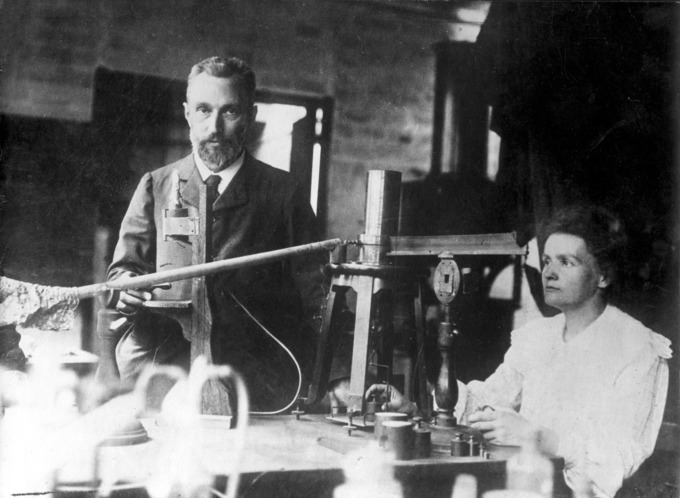 Radium became highly desirable because it was about two million times as radioactive as uranium. The Curies’ radium salt glowed visibly from the radiation. This radiation took its toll on them and other unaware researchers, though.

Shortly after Marie completed her PhD, both Curies and Becquerel shared the 1903 Nobel Prize in Physics for their work on radioactivity. Awarded the 1911 Nobel Prize in Chemistry for her discovery of two new elements, Curie remains the only person to win Nobel Prizes in both physics and chemistry. Marie’s radioactive fingerprints on some pages of her notebooks can still expose film.

Marie suffered from radiation-induced lesions and died of leukemia, likely caused by radiation. She was active in research almost until her death in 1934. The following year, her daughter and son-in-law, Irene and Frederic Joliot-Curie, were awarded the Nobel Prize in Chemistry for their discovery of artificially induced radiation.

Radioactive decay occurs when an unstable atomic nucleus loses energy by emitting energy in the form of emitted particles or electromagnetic waves, called radiation. Isotopes are atoms of the same element (thereby having the same number of protons) which differ in the number of neutrons in their nucleus. Some isotopes of a given element are more unstable than others, causing a nuclear reaction which releases energy to achieve a more stable nuclear configuration. Such isotopes are radioactive, and are referred to as “radioisotopes.”

There are many types of emmitted particles and radiation that radioisotopes produce when they decay. The types we will discuss here are: alpha, beta, and gamma (listed in increasing ability to penetrate matter). Alpha decay is seen only in heavier elements greater than atomic number 52, tellurium. The other two types of decay are seen in all of the elements. 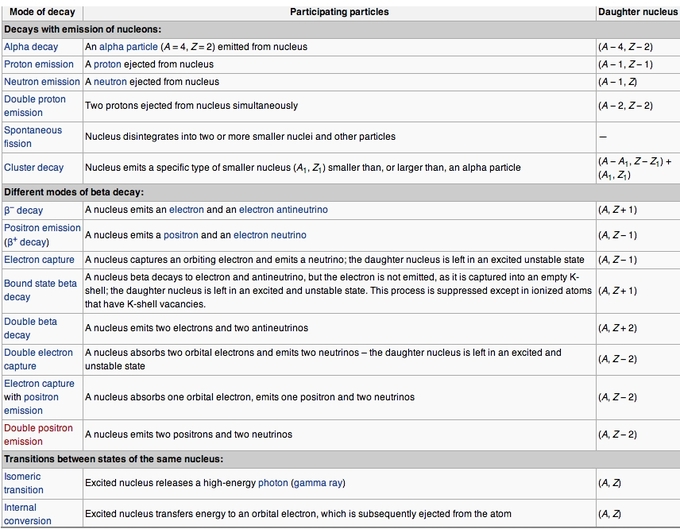 Table of modes of radioactive decay: Radionuclides can undergo a number of different reactions, summarized here. A nucleus with mass number A and atomic number Z is represented as (A, Z). The column “Daughter nucleus” indicates the difference between the new nucleus and the original nucleus. Thus, (A − 1, Z) means that the mass number is one less than before, but the atomic number didn’t change.

The three types of radiation have different levels of penetrating power. Penetrating power refers to the energy with which the radiation particles are ejected from the atom. The higher the energy, the more the particles or light produced by radioactive decay will penetrate a substance.

Alpha decay occurs because the nucleus of a radioisotope has too many protons. A nucleus with too many protons causes repulsion between these like charges. To reduce this repulsion, the nucleus emits an α particle. Examples of this can be seen in the decay of americium (Am) to neptunium (Np).

In radioactive nuclei with too many neutrons, a neutron can be converted into an electron, called beta particle. Beta particles (β) have a higher penetration power than alpha particles (they are able to pass through thicker materials such as paper).

Gamma decay reactions occur if the energy of the radioisotope’s nucleus is too high, and the resulting atomic number and atomic mass remain unchanged during the course of the reaction.

Radioactive decay rate is exponential and is characterized by constants, such as half-life, as well the activity and number of particles.

The decay rate of a radioactive substance is characterized by the following constant quantities:

Although these are constants, they are associated with statistically random behavior of populations of atoms. Predictions using these constants are less accurate for small number of atoms.

There are also time-variable quantities to consider:

Radioactivity is one very frequent example of exponential decay. The law of radioactive decay describes the statistical behavior of a large number of nuclides, rather than individual ones. In the following relation, the number of nuclides or nuclide population, N, is of course a natural number. Given a sample of a particular radioisotope, the number of decay events, −dN, expected to occur in a small interval of time, dt, is proportional to the number of atoms present N, that is:

Particular radionuclides decay at different rates, so each has its own decay constant, λ. The expected decay [latex]\frac {-\text{dN}}{\text{N}}[/latex] is proportional to an increment of time, dt. The constant [latex]\lambda[/latex] is put in place to make the two sides equal:

The negative sign indicates that N decreases as time increases, as each decay event follows one after another. The solution to this first-order differential equation is the function:

The SI unit of radioactive activity is the becquerel (Bq), in honor of the scientist Henri Becquerel. One Bq is defined as one transformation, decay, or disintegration per second. Since sensible sizes of radioactive material contain many atoms, a Bq is a tiny measure of activity; amounts giving activities on the order of GBq (gigabecquerel, 1 x 109 decays per second) or TBq (terabecquerel, 1 x 1012 decays per second) are commonly used.

Another unit of radioactivity is the curie, Ci, which was originally defined as the amount of radium emanation (radon-222) in equilibrium with one gram of pure radium, isotope Ra-226. At present, it is equal, by definition, to the activity of any radionuclide decaying with a disintegration rate of 3.7 × 1010 Bq, so that 1 curie (Ci) = 3.7 × 1010 Bq. The use of Ci is currently discouraged by the SI. Low activities are also measured in disintegrations per minute (dpm).

To solve, we need to use our equation:

Since we are dealing with the half-life we will use values for N and No that are equivalent to 0.5.

Now plug in the half-life for the time (t).

Calculate the half-life of a radioactive element

Radioactive decay is a random process at the single- atom level; is impossible to predict exactly when a particular atom will decay. However, the chance that a given atom will decay is constant over time. For a large number of atoms, the decay rate for the collection as a whole can be computed from the measured decay constants of the nuclides, or, equivalently, from the half-lives.

Radioactive decay simulation: A simulation of many identical atoms undergoing radioactive decay, starting with four atoms (left) and 400 atoms (right). The number at the top indicates how many half-lives have elapsed

Given a sample of a particular radionuclide, the half-life is the time taken for half of its atoms to decay. The following equation is used to predict the number of atoms (N) of a a given radioactive sample that remain after a given time (t):

This relationship between the half-life and the decay constant shows that highly radioactive substances are quickly spent, while those that radiate weakly endure longer. Half-lives vary widely; the half-life of 209Bi is 1019 years, while unstable nuclides can have half-lives that have been measured as short as 10−23 seconds.

So, for 50 grams to decay to 12.5 grams, two half-lives, which would take 36 days total, would need to pass. This means each half-life for element X is 18 days.

Radiometric dating is used to date materials using the decay rate of a radioactive isotope.

Radiometric dating, often called radioactive dating, is a technique used to determine the age of materials such as rocks. It is based on a comparison between the observed abundance of a naturally occurring radioactive isotope and its decay products, using known decay rates. It is the principal source of information about the absolute age of rocks and other geological features, including the age of the Earth itself, and it can be used to date a wide range of natural and man-made materials.

After one half-life has elapsed, one half of the atoms of the nuclide in question will have decayed into a “daughter” nuclide, or decay product. In many cases, the daughter nuclide is radioactive, resulting in a decay chain. This chain eventually ends with the formation of a stable, nonradioactive daughter nuclide. Each step in such a chain is characterized by a distinct half-life. In these cases, the half-life of interest in radiometric dating is usually the longest one in the chain. This half-life will be the rate-limiting factor in the ultimate transformation of the radioactive nuclide into its stable daughter(s).

Systems that have been exploited for radiometric dating have half-lives ranging from only about 10 years (e.g., tritium) to over 100 billion years (e.g., Samarium-147). However, in general, the half-life of a nuclide depends solely on its nuclear properties and is essentially a constant. Therefore, in any material containing a radioactive nuclide, the proportion of the original nuclide to its decay products changes in a predictable way as the original nuclide decays over time. This predictability allows the relative abundances of related nuclides to be used as a clock to measure the time it takes for the parent atom to decay into the daughter atom(s).

The mathematical expression that relates radioactive decay to geologic time is:

Radioactivity by Tulsa Community College is licensed under a Creative Commons Attribution 4.0 International License, except where otherwise noted.