When the solar system formed, most of the matter ended up in the Sun. Material spinning in a disk around the Sun clumped together into larger and larger pieces to form the eight planets. But some of the smaller pieces of matter never joined one of these larger bodies and are still out there in space.

Asteroids are very small, rocky bodies that orbit the Sun. “Asteroid” means “star-like,” and in a telescope, asteroids look like points of light, just like stars. Asteroids are irregularly shaped because they do not have enough gravity to become round. They are also too small to maintain an atmosphere and without internal heat they are not geologically active (Figure  below). Collisions with other bodies may break up the asteroid or create craters on its surface. 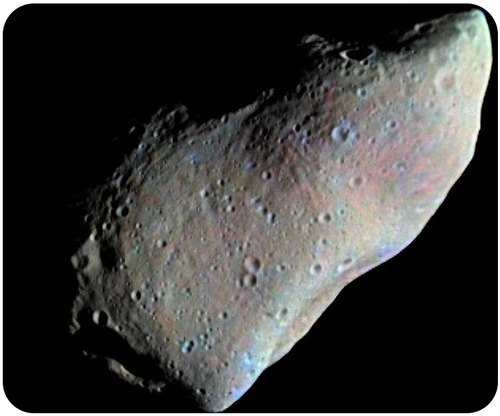 Asteroid impacts have had dramatic impacts on the shaping of the planets, including Earth. Early impacts caused the planets to grow as they cleared their portions of space. An impact with an asteroid about the size of Mars caused fragments of Earth to fly into space and ultimately create the Moon. Asteroid impacts are linked to mass extinctions throughout Earth history. 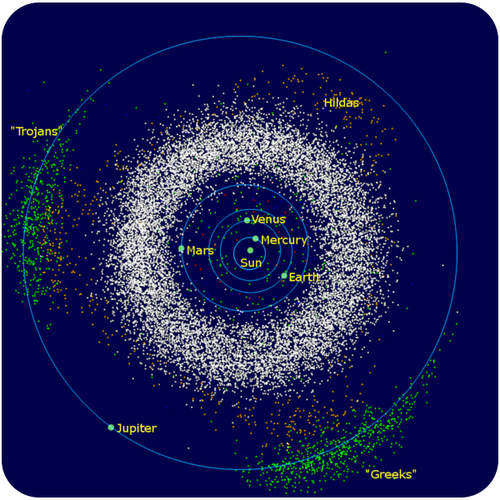 The white dots in the figure are asteroids in the main asteroid belt. Other groups of asteroids closer to Jupiter are called the Hildas (orange), the Trojans (green), and the Greeks (also green).

Scientists think that the bodies in the asteroid belt formed during the formation of the solar system. The asteroids might have come together to make a single planet, but they were pulled apart by the intense gravity of Jupiter.

Any object whose orbit crosses Earth’s can collide with Earth and many asteroids do. On average, each year a rock about 5–10 m in diameter hits Earth (Figure  below). Since past asteroid impacts have been implicated in mass extinctions, astronomers are always on the lookout for new asteroids, and follow the known near-Earth asteroids closely, so they can predict a possible collision as early as possible.

A painting of what an asteroid a few kilometers across might look like as it strikes Earth.

Scientists are interested in asteroids because they are representatives of the earliest solar system (Figure  below). Eventually asteroids could be mined for rare minerals or for construction projects in space. A few missions have studied asteroids directly. NASA’s DAWN mission orbited asteroid Vesta from July 2011 to September 2012 and is on its way to meet dwarf planet Ceres in 2015. 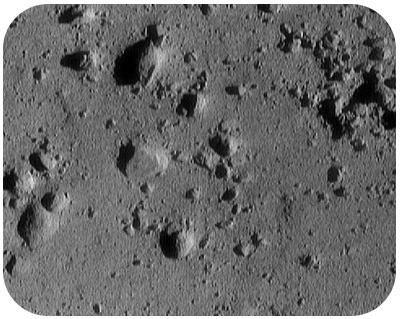 The NEAR Shoemaker probe took this photo as it was about to land on 433 Eros in 2001.

Thousands of objects, including comets and asteroids, are zooming around our solar system; some could be on a collision course with Earth. QUEST explores how these Near Earth Objects are being tracked and what scientists are saying should be done to prevent a deadly impact. Learn more at: http://science.kqed.org/quest/video/asteroid-hunters/.

A meteor, such as in Figure  below, is a streak of light across the sky. People call them shooting stars but they are actually small pieces of matter burning up as they enter Earth’s atmosphere from space. 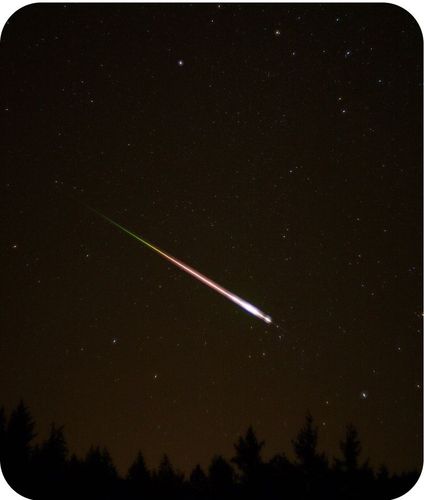 A meteor streaks across the sky.

Meteors are called meteoroids before they reach Earth’s atmosphere. Meteoroids are smaller than asteroids and range from the size of boulders down to the size of tiny sand grains. Still smaller objects are called interplanetary dust. When Earth passes through a cluster of meteoroids, there is a meteor shower. These clusters are often remnants left behind by comet tails.

Although most meteors burn up in the atmosphere, larger meteoroids may strike the Earth’s surface to create a meteorite. Meteorites are valuable to scientists because they provide clues about our solar system. Many meteorites are from asteroids that formed when the solar system formed (Figure  below). A few meteorites are made of rocky material that is thought to have come from Mars when an asteroid impact shot material off the Martian surface and into space. 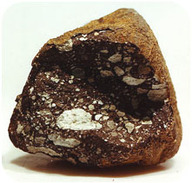 A lunar meteorite originates on the Moon and strikes Earth.

Comets are small, icy objects that have very elliptical orbits around the Sun. Their orbits carry them from the outer solar system to the inner solar system, close to the Sun (Figure  below). Early in Earth’s history, comets may have brought water and other substances to Earth during collisions. 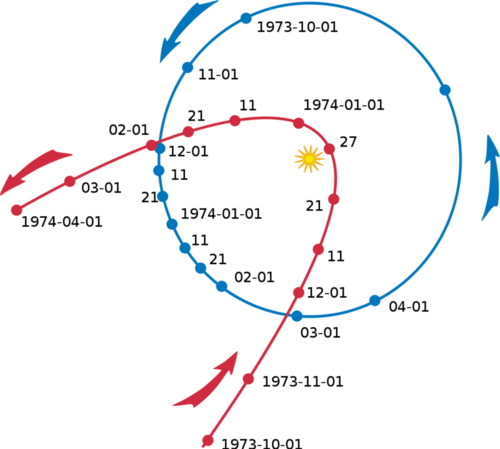 The highly elliptical orbit of Kohoutek (red) relative to Earth’s more circular orbit (blue) and the position of the Sun.

Comet tails form the outer layers of ice melt and evaporate as the comet flies close to the Sun. The ice from the comet vaporizes and forms a glowing coma, which reflects light from the Sun. Radiation and particles streaming from the Sun push this gas and dust into a long tail that always points away from the Sun (Figure  below). Comets appear for only a short time when they are near the Sun, then seem to disappear again as they move back to the outer solar system. 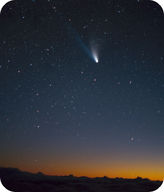 Comet Hale-Bopp, also called the Great Comet of 1997, shone brightly for several months in 1997. The comet has two visible tails: a bright, curved dust tail and a fainter, straight tail of ions (charged atoms) pointing directly away from the Sun.

The time between one appearance of a comet and the next is called the comet’s period. Halley’s comet, with a period of 75 years, will next be seen in 2061. The first mention of the comet in historical records may go back as much as two millennia.

Where Comets Come From

Short-period comets, with periods of about 200 years or less, come from a region beyond the orbit of Neptune. The Kuiper belt (pronounced “KI-per”) contains not only comets, but asteroids, and at least two dwarf planets.

From the time it was discovered in 1930 until the early 2000s Pluto was considered the ninth planet. When astronomers first located Pluto, the telescopes were not as good so Pluto and its moon, Charon, were seen as one much larger object (Figure  below). With better telescopes, astronomers realized that Pluto was much smaller than they had thought. 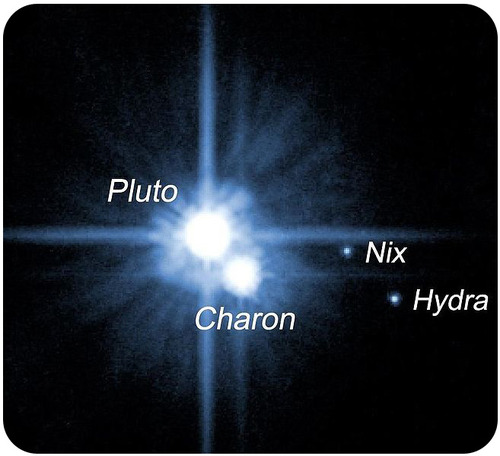 Pluto and its moon Charon are actually two objects.

Better technology also allowed astronomers to discover many smaller objects like Pluto that orbit the Sun. One of them, Eris, discovered in 2005, is even larger than Pluto (Figure  below). 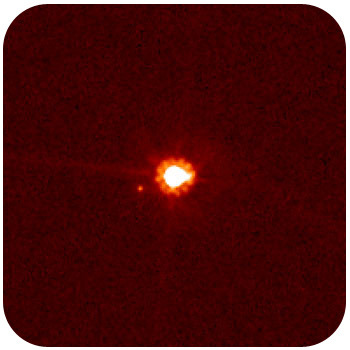 Eris and its moon Dysnomia.

Even when it was considered a planet, Pluto was an oddball. Unlike the other outer planets in the solar system, which are all gas giants, it is small, icy, and rocky. With a diameter of about 2,400 km, it is only about one-fifth the mass of Earth’s Moon. Pluto’s orbit is tilted relative to the other planets and is shaped like a long, narrow ellipse. Pluto’s orbit sometimes even passes inside Neptune’s orbit.

In 1992 Pluto’s orbit was recognized to be part of the Kuiper belt. With more than 200 million Kuiper belt objects, Pluto has failed the test of clearing other bodies out its orbit.

From what you’ve read above, do you think Pluto should be called a planet? Why are people hesitant to take away Pluto’s planetary status?

In 2006, the International Astronomical Union decided that there were too many questions surrounding what could be called a planet and so refined the definition of a planet.

According to the new definition, a planet must:

A dwarf planet is an object that meets items the first three items in the list above, but not but not the fourth. Pluto is now called a dwarf planet, along with the objects Ceres, Makemake, and Eris.

According to the IAU, a dwarf planet must:

A video showing why Pluto isn’t a planet any more: http://www.youtube.com/watch?v=FqX2YdnwtRc.

Pluto has three moons of its own. The largest, Charon, is big enough that the Pluto-Charon system is sometimes considered to be a double dwarf planet (Figure  below). Two smaller moons, Nix and Hydra, were discovered in 2005. But having moons is not enough to make an object a planet.

Ceres is the largest object in the asteroid belt (Figure  below). Before 2006, Ceres was considered the largest of the asteroids, with only about 1.3% of the mass of the Earth’s Moon. But unlike the asteroids, Ceres has enough mass that its gravity causes it to be shaped like a sphere. Like Pluto, Ceres is rocky.

Is Ceres a planet? How does it match the criteria above? Ceres orbits the Sun, is round, and is not a moon. As part of the asteroid belt, its orbit is full of other smaller bodies, so Ceres fails the fourth criterion for being a planet. 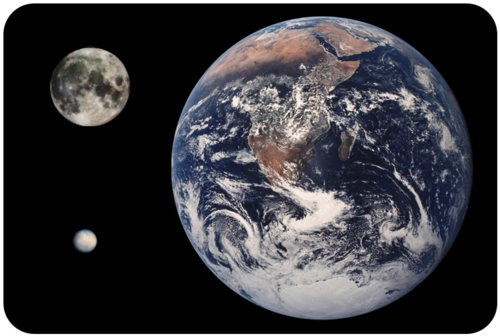 This composite image compares the size of the dwarf planet Ceres to Earth and the Moon.

Makemake is the third largest and second brightest dwarf planet we have discovered so far (Figure  below). With a diameter estimated to be between 1,300 and 1,900 km, it is about three-quarters the size of Pluto. Makemake orbits the Sun in 310 years at a distance between 38.5 to 53 AU. It is thought to be made of methane, ethane, and nitrogen ices. 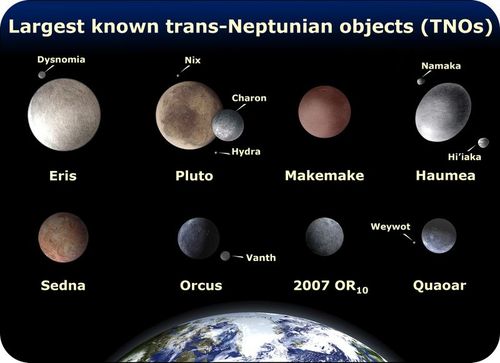 Largest Known Trans-Neptunian Objects. Makemake is named after the deity that created humanity in the mythology of the people of Easter Island.

Eris is the largest known dwarf planet in the solar system — about 27% more massive than Pluto. The object was not discovered until 2003 because it is about three times farther from the Sun than Pluto, and almost 100 times farther from the Sun than Earth is. For a short time Eris was considered the “tenth planet” in the solar system, but its discovery helped to prompt astronomers to better define planets and dwarf planets in 2006. Eris also has a small moon, Dysnomia that orbits it once about every 16 days.

2. Where are most asteroids found?

3. What is the difference between a meteor, a meteoroid, and a meteorite?

4. Why are meteorites extremely valuable to scientists?

5. What objects would scientists study to learn about the composition of the Oort cloud?

6. Why is Pluto no longer considered a planet?

7. Name the four known dwarf planets in our solar system.

Other Objects in the Solar System by Tulsa Community College is licensed under a Creative Commons Attribution 4.0 International License, except where otherwise noted.