Comparison between Covalent and Ionic Compounds

Compounds are defined as substances containing two or more different chemical elements. They have distinct chemical structures characterized by a fixed ratio of atoms held together by chemical bonds. Here, we discuss two classes of compounds based on the bond type that holds the atoms together: ionic and covalent.

Covalent bonds are characterized by the sharing of electrons between two or more atoms. These bonds mostly occur between nonmetals or between two of the same (or similar) elements.Two atoms with similar electronegativity will not exchange an electron from their outermost shell; the atoms instead share electrons so that their valence electron shell is filled.

Covalent bonding between hydrogen atoms: Since each hydrogen atom has one electron, they are able to fill their outermost shells by sharing a pair of electrons through a covalent bond.

Some examples of compounds with ionic bonding include NaCl, KI, MgCl2.

Formation of sodium fluoride (NaF): The transfer of an electron from a neutral sodium atom to a neutral fluorine atom creates two oppositely charge ions: Na+ and F–. Attraction of the oppositely charged ions is the ionic bond between Na and F.

Covalent and ionic compounds can be differentiated easily because of their different physical properties based on the nature of their bonding. Here are some differences:

Single covalent bonds are sigma bonds, which occur when one pair of electrons is shared between atoms.

Hierarchical Structure of the Atom

There are four hierarchical levels that describe the position and energy of the electrons an atom has. Here they are listed along with some of the possible values (or letters) they can have:

Principal energy levels are made out of sublevels, which are in turn made out of orbitals, in which electrons are found.

An atomic orbital is defined as the probability of finding an electron in an area around an atom’s nucleus. Generally, orbital shapes are drawn to describe the region in space in which electrons are likely to be found. This is referred to as “electron density.”

Atomic orbitals: The shapes of the first five atomic orbitals are shown in order: 1s, 2s, and the three 2p orbitals. Both blue and orange-shaded regions represent regions in space where electrons can be found ‘belonging’ to these orbitals.

Covalent bonding occurs when two atomic orbitals come together in close proximity and their electron densities overlap. The strongest type of covalent bonds are sigma bonds, which are formed by the direct overlap of orbitals from each of the two bonded atoms. Regardless of the atomic orbital type, sigma bonds can occur as long as the orbitals directly overlap between the nuclei of the atoms.

Orbital overlaps and sigma bonds: These are all possible overlaps between different types of atomic orbitals that result in the formation of a sigma bond between two atoms. Notice that the area of overlap always occurs between the nuclei of the two bonded atoms.

Sigma bond in the hydrogen molecule: Higher intensity of the red color indicates a greater probability of the bonding electrons being localized between the nuclei.

Double and triple bonds, comprised of sigma and pi bonds, increase the stability and restrict the geometry of a compound.

Describe the types of orbital overlap that occur in single, double, and triple bonds

Covalent bonding occurs when electrons are shared between atoms. Double and triple covalent bonds occur when four or six electrons are shared between two atoms, and they are indicated in Lewis structures by drawing two or three lines connecting one atom to another. It is important to note that only atoms with the need to gain or lose at least two valence electrons through sharing can participate in multiple bonds.

Double and triple bonds can be explained by orbital hybridization, or the ‘mixing’ of atomic orbitals to form new hybrid orbitals. Hybridization describes the bonding situation from a specific atom’s point of view. A combination of s and p orbitals results in the formation of hybrid orbitals. The newly formed hybrid orbitals all have the same energy and have a specific geometrical arrangement in space that agrees with the observed bonding geometry in molecules. Hybrid orbitals are denoted as spx, where s and p denote the orbitals used for the mixing process, and the value of the superscript x ranges from 1-3, depending on how many p orbitals are required to explain the observed bonding.

Hybridized orbitals: A schematic of the resulting orientation in space of sp3 hybrid orbitals. Notice that the sum of the superscripts (1 for s, and 3 for p) gives the total number of formed hybrid orbitals. In this case, four orbitals are produced which point along the direction of the vertices of a tetrahedron.

Pi, or [latex]\pi[/latex], bonds occur when there is overlap between unhybridized p orbitals of two adjacent atoms. The overlap does not occur between the nuclei of the atoms, and this is the key difference between sigma and pi bonds. For the bond to form efficiently, there has to be a proper geometrical relationship between the unhybridized p orbitals: they must be on the same plane. 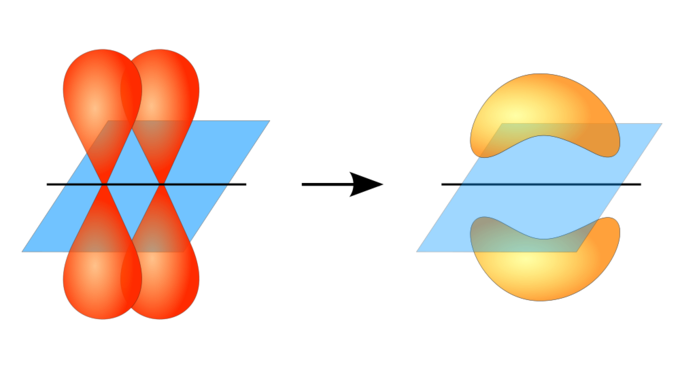 Pi bond formation: Overlap between adjacent unhybridized p orbitals produces a pi bond. The electron density corresponding to the shared electrons is not concentrated along the internuclear axis (i.e., between the two atoms), unlike in sigma bonds.

Multiple bonds between atoms always consist of a sigma bond, with any additional bonds being of the π type.

The simplest example of an organic compound with a double bond is ethylene, or ethene, C2H4. The double bond between the two carbon atoms consists of a sigma bond and a π bond. 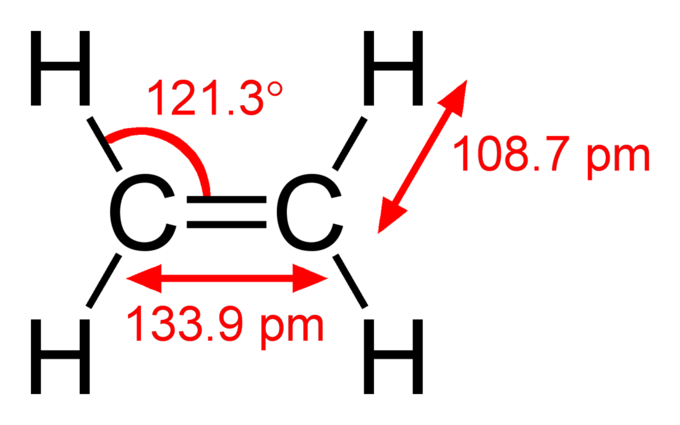 Ethylene bonding: An example of a simple molecule with a double bond between carbon atoms. The bond lengths and angles (indicative of the molecular geometry) are indicated.

Another consequence of the presence of multiple bonds between atoms is the difference in the distance between the nuclei of the bonded atoms. Double bonds have shorter distances than single bonds, and triple bonds are shorter than double bonds.

The covalent bonding model helps predict many of the physical properties of compounds.

Discuss the qualitative predictions of covalent bond theory on the boiling and melting points, bond length and strength, and conductivity of molecules

First described by Gilbert Lewis, a covalent bond occurs when electrons of different atoms are shared between the two atoms. These cases of electron sharing can be predicted by the octet rule. The octet rule is a chemical rule that generalizes that atoms of low atomic number (< 20) will combine in a way that results in their having 8 electrons in their valence shells. Having 8 valence electrons is favorable for stability and is similar to the electron configuration of the inert noble gases. In a covalent bond, the shared electrons contribute to each atom’s octet and thus enhance the stability of the compound.

The Lewis bonding theory can explain many properties of compounds. For example, the theory predicts the existence of diatomic molecules such as hydrogen, H2, and the halogens (F2, Cl2, Br2, I2). A H atom needs one additional electron to fill its valence level, and the halogens need one more electron to fill the octet in their valence levels. Lewis bonding theory states that these atoms will share their valence electrons, effectively allowing each atom to create its own octet.

Several physical properties of molecules/compounds are related to the presence of covalent bonds:

However, the Lewis theory of covalent bonding does not account for some observations of compounds in nature. The theory predicts that with more shared electrons, the bond between the two atoms should be stronger. According to the theory, triple bonds are stronger than double bonds, and double bonds are stronger than single bonds. This is true. However, the theory implies that the bond strength of double bonds is twice that of single bonds, which is not true. Therefore, while the covalent bonding model accounts for many physical observations, it does have its limitations.

The Covalent Bond by Tulsa Community College is licensed under a Creative Commons Attribution 4.0 International License, except where otherwise noted.