Ohm’s Law states that current is proportional to voltage; circuits are ohmic if they obey the relation V=IR.

What drives current? We can think of various devices—such as batteries, generators, wall outlets, and so on—which are necessary to maintain a current. All such devices create a potential difference and are loosely referred to as voltage sources. When a voltage source is connected to a conductor, it applies a potential difference V that creates an electric field. The electric field, in turn, exerts force on charges, causing current. The current that flows through most substances is directly proportional to the voltage V applied to it. The German physicist Georg Simon Ohm (1787-1854) was the first to experimentally demonstrate that the current in a metal wire is directly proportional to the voltage applied: [latex]\text{I} \propto \text{V}[/latex].

This important relationship is known as Ohm’s law. It can be viewed as a cause-and-effect relationship, with voltage the cause and current the effect. This is an empirical law like that for friction—an experimentally observed phenomenon. Such a linear relationship doesn’t always occur. Recall that while voltage drives current, resistance impedes it. Collisions of moving charges with atoms and molecules in a substance transfer energy to the substance and limit current. The current is therefore inversely proportional to the resistance: [latex]\text{I} \propto \frac{1}{\text{R}}[/latex]. 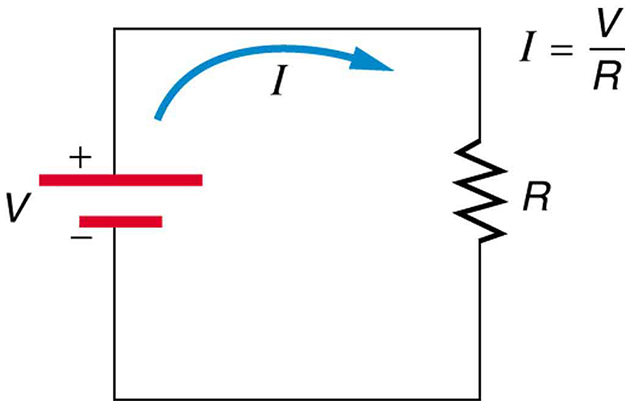 Simple Circuit: A simple electric circuit in which a closed path for current to flow is supplied by conductors (usually metal wires) connecting a load to the terminals of a battery, represented by the red parallel lines. The zigzag symbol represents the single resistor and includes any resistance in the connections to the voltage source.

The unit for resistance is the ohm where 1Ω = 1 V/A. We can combine the two relations above to obtain I = V/R. This relationship is also called Ohm’s law. In this form Ohm’s law really defines resistance for certain materials. Ohm’s law (like Hooke’s law) is not universally valid. The many substances for which Ohm’s law holds are called ohmic. These include good conductors like copper and aluminum, and some poor conductors under certain circumstances. Ohmic materials have a resistance R that is independent of voltage V and current I. An object that has simple resistance is called a resistor, even if its resistance is small. 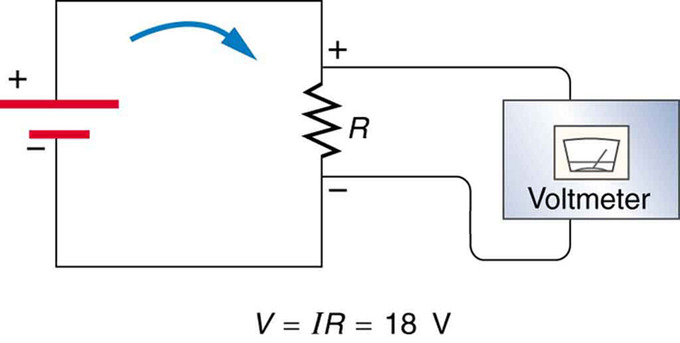 Voltage Drop: The voltage drop across a resistor in a simple circuit equals the voltage output of the battery.

Additional insight is gained by solving I=V/R for V, yielding V=IR. This expression for V can be interpreted as the voltage drop across a resistor produced by the flow of current I. The phrase IR drop is often used for this voltage. If voltage is measured at various points in a circuit, it will be seen to increase at the voltage source and decrease at the resistor. Voltage is similar to fluid pressure. The voltage source is like a pump, creating a pressure difference, causing current—the flow of charge. The resistor is like a pipe that reduces pressure and limits flow because of its resistance. Conservation of energy has important consequences here. The voltage source supplies energy (causing an electric field and a current), and the resistor converts it to another form (such as thermal energy). In a simple circuit (one with a single simple resistor), the voltage supplied by the source equals the voltage drop across the resistor, since E=qΔV, and the same q flows through each. Thus, the energy supplied by the voltage source and the energy converted by the resistor are equal.

In a true ohmic device, the same value of resistance will be calculated from R = V/I regardless of the value of the applied voltage V. That is, the ratio of V/I is constant, and when current is plotted as a function of voltage the curve is linear (a straight line). If voltage is forced to some value V, then that voltage V divided by measured current I will equal R. Or if the current is forced to some value I, then the measured voltage V divided by that current I is also R. We visualize the plot of I versus V as a straight line. There are, however, components of electrical circuits which do not obey Ohm’s law; that is, their relationship between current and voltage (their I–V curve) is nonlinear (or non-ohmic). An example is the p-n junction diode.

Superconductivity is a phenomenon of zero electrical resistance and expulsion of magnetic fields in certain materials below a critical temp.

Superconductivity is a phenomenon of exactly zero electrical resistance and expulsion of magnetic fields occurring in certain materials when cooled below a characteristic critical temperature. It was discovered by Heike Kamerlingh Onnes (shown in ) on April 8, 1911 in Leiden. 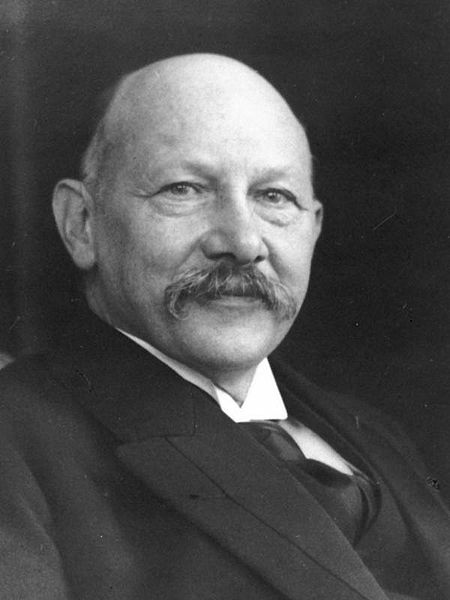 Most of the physical properties of superconductors vary from material to material, such as the heat capacity and the critical temperature, critical field, and critical current density at which superconductivity is destroyed. On the other hand, there is a class of properties independent of the underlying material. For instance, all superconductors have exactly zero resistivity to low applied currents when there is no magnetic field present or if the applied field does not exceed a critical value. The existence of these “universal” properties implies that superconductivity is a thermodynamic phase, and thus possesses certain distinguishing properties that are largely independent of microscopic details.

When a superconductor is placed in a weak external magnetic field H, and cooled below its transition temperature, the magnetic field is ejected. The Meissner effect does not cause the field to be completely ejected. Rather, the field penetrates the superconductor to a very small distance (characterized by a parameter λ), called the London penetration depth. It decays exponentially to zero within the bulk of the material. The Meissner effect is a defining characteristic of superconductivity. For most superconductors, the London penetration depth is on the order of 100 nm. 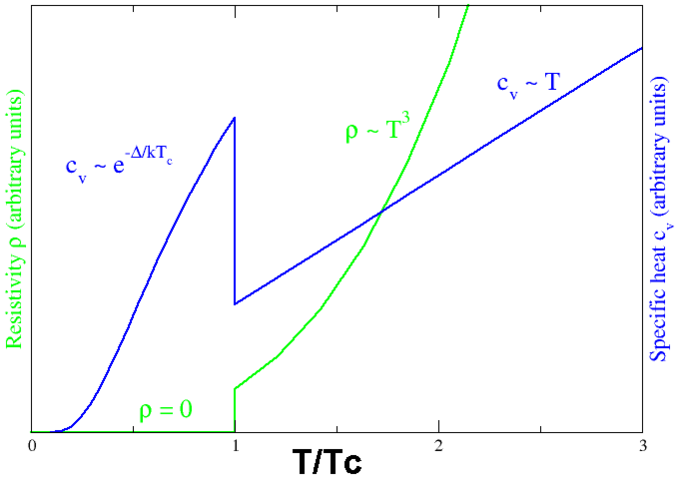 Superconductors are also able to maintain a current with no applied voltage whatsoever—a property exploited in superconducting electromagnets such as those found in MRI machines. Experiments have demonstrated that currents in superconducting coils can persist for years without any measurable degradation. Experimental evidence points to a current lifetime of at least 100,000 years. Theoretical estimates for the lifetime of a persistent current can exceed the estimated lifetime of the universe, depending on the wire geometry and the temperature. 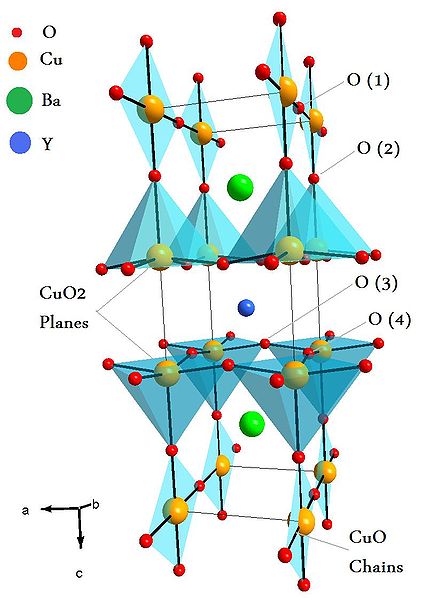 Resistance and resistivity describe the extent to which an object or material impedes the flow of electric current.

Resistance is the electric property that impedes a current. A current flowing through a wire (or resistor) is like water flowing through a pipe, and the voltage drop across the wire is like the pressure drop which pushes water through the pipe. Resistance is proportional to how much pressure is required to achieve a given flow, while conductance is proportional to how much flow occurs for a given pressure. Conductance and resistance are reciprocals. The resistance of an object depends on its shape and the material of which it is composed. The cylindrical resistor is easy to analyze, and by so doing we can gain insight into the resistance of more complicated shapes. As you might expect, the cylinder’s electric resistance R is directly proportional to its length L, similar to the resistance of a pipe to fluid flow. The longer the cylinder, the more collisions charges will make with its atoms. The greater the diameter of the cylinder, the more current it can carry (again, similar to the flow of fluid through a pipe). In fact, R is inversely proportional to the cylinder’s cross-sectional area A.

As mentioned, for a given shape, the resistance depends on the material of which the object is composed. Different materials offer different resistance to the flow of charge. We define the resistivity ρ of a substance so that theresistanceR of an object is directly proportional to ρ. Resistivity ρ is an intrinsic property of a material, independent of its shape or size. In contrast, the resistance R is an extrinsic property that does depend on the size an shape of the resistor. (A similar intrinsic/extrinsic relation exists between heat capacity C and the specific heat c). Recall that an object whose resistance is proportional to the voltage and current is known as a resistor. 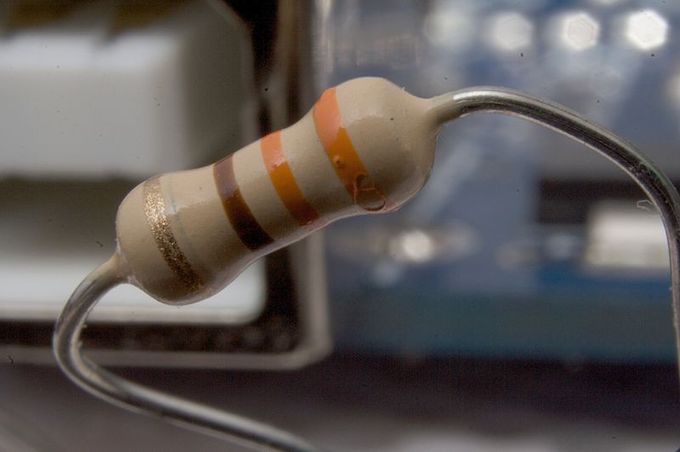 What determines resistivity? The resistivity of different materials varies by an enormous amount. For example, the conductivity of teflon is about 1030 times lower than the conductivity of copper. Why is there such a difference? Loosely speaking, a metal has large numbers of “delocalized” electrons that are not stuck in any one place, but free to move across large distances, whereas in an insulator (like teflon), each electron is tightly bound to a single atom, and a great force is required to pull it away. Likewise, resistors range over many orders of magnitude. Some ceramic insulators, such as those used to support power lines, have resistances of 1012 Ω or more. A dry person may have a hand-to-foot resistance of 105 Ω, whereas the resistance of the human heart is about 103 Ω. A meter-long piece of large-diameter copper wire may have a resistance of 10−5 Ω, and superconductors have no resistance at all (they are non-ohmic). The potential difference (voltage) seen across the network is the sum of those voltages, thus the total resistance (the series equivalent resistance) can be found as the sum of those resistances:

As a special case, the resistance of N resistors connected in series, each of the same resistance R, is given by NR.Resistors in a parallel configuration are each subject to the same potential difference (voltage), however the currents through them add. Thus the equivalent resistance (Req) of the network can be computed:

The parallel equivalent resistance can be represented in equations by two vertical lines “||” (as in geometry) as a simplified notation. Occasionally two slashes “//” are used instead of “||”, in case the keyboard or font lacks the vertical line symbol. For the case of two resistors in parallel, this can be calculated using:

As a special case, the resistance of N resistors connected in parallel, each of the same resistance R, is given by R/N. A resistor network that is a combination of parallel and series connections can be broken up into smaller parts that are either one or the other, such as is shown in.

Resistor Network: In this combination circuit, the circuit can be broken up into a series component and a parallel component.

However, some complex networks of resistors cannot be resolved in this manner. These require a more sophisticated circuit analysis. One practical application of these relationships is that a non-standard value of resistance can generally be synthesized by connecting a number of standard values in series or parallel. This can also be used to obtain a resistance with a higher power rating than that of the individual resistors used. In the special case of N identical resistors all connected in series or all connected in parallel, the power rating of the individual resistors is thereby multiplied by N.

Dependence of Resistance on Temperature

Resistivity and resistance depend on temperature with the dependence being linear for small temperature changes and nonlinear for large. 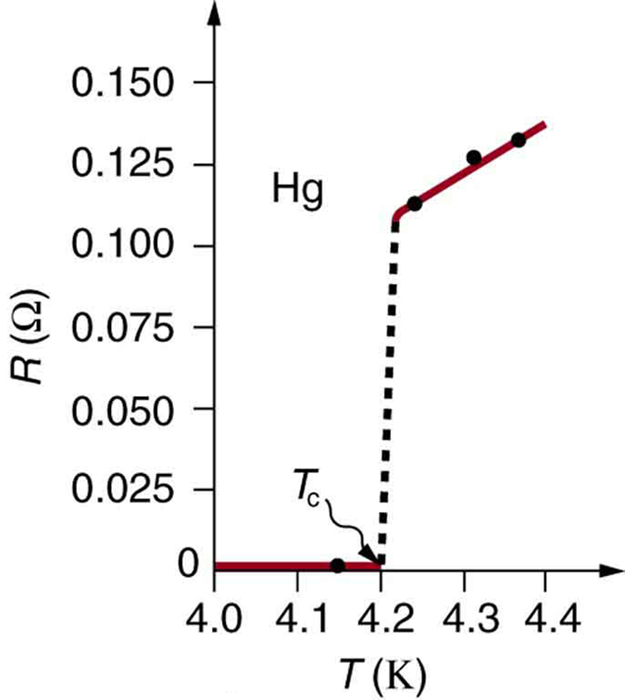 Note also that α is negative for semiconductors, meaning that their resistivity decreases with increasing temperature. They become better conductors at higher temperature because increased thermal agitation increases the number of free charges available to carry current. This property of decreasing ρ with temperature is also related to the type and amount of impurities present in the semiconductors.

Thermometers: These familiar thermometers are based on the automated measurement of a thermistor’s temperature-dependent resistance.

Resistance and Ohm's Law by Tulsa Community College is licensed under a Creative Commons Attribution 4.0 International License, except where otherwise noted.