Nature of Acids and Bases

Acids and bases will neutralize one another to form liquid water and a salt.

Describe the general properties of acids and bases, comparing the three ways to define them

Acids have long been recognized as a distinctive class of compounds whose aqueous solutions exhibit the following properties:

Acidic solutions have a pH less than 7, with lower pH values corresponding to increasing acidity. Common examples of acids include acetic acid (in vinegar), sulfuric acid (used in car batteries), and tartaric acid (used in baking).

There are three common definitions for acids:

The strength of an acid refers to how readily an acid will lose or donate a proton, oftentimes in solution. A stronger acid more readily ionizes, or dissociates, in a solution than a weaker acid. The six common strong acids are:

Each of these acids ionize essentially 100% in solution. By definition, a strong acid is one that completely dissociates in water; in other words, one mole of the generic strong acid, HA, will yield one mole of H+, one mole of the conjugate base, A−, with none of the unprotonated acid HA remaining in solution. By contrast, however, a weak acid, being less willing to donate its proton, will only partially dissociate in solution. At equilibrium, both the acid and the conjugate base will be present, along with a significant amount of the undissociated species, HA.

Two key factors contribute to overall strength of an acid:

These two factors are actually related. The more polar the molecule, the more the electron density within the molecule will be drawn away from the proton. The greater the partial positive charge on the proton, the weaker the H-A bond will be, and the more readily the proton will dissociate in solution.

Acid strengths are also often discussed in terms of the stability of the conjugate base. Stronger acids have a larger Ka and a more negative pKa than weaker acids. 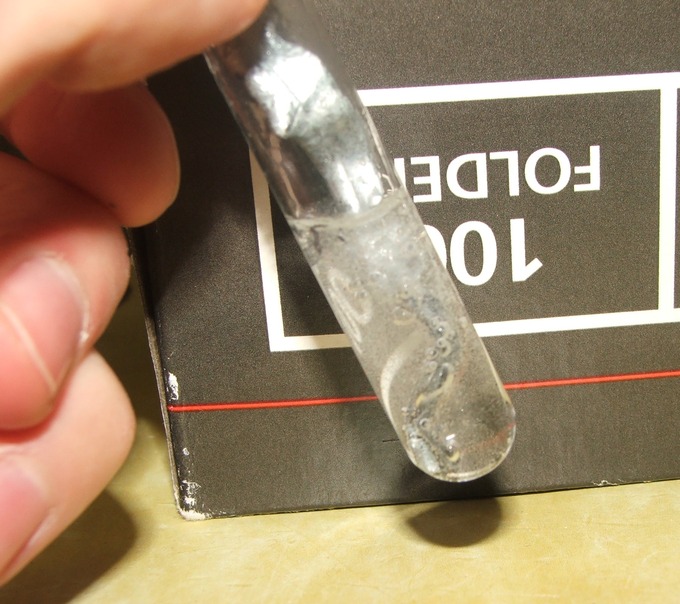 There are three common definitions of bases:

In water, basic solutions will have a pH between 7-14.

Base Strength and Strong Bases

A strong base is the converse of a strong acid; whereas an acid is considered strong if it can readily donate protons, a base is considered strong if it can readily deprotonate (i.e, remove an H+ ion) from other compounds. As with acids, we often talk of basic aqueous solutions in water, and the species being deprotonated is often water itself. The general reaction looks like:

Most alkali metal and some alkaline earth metal hydroxides are strong bases in solution. These include:

Acids and bases react with one another to yield water and a salt. For instance:

This reaction is called a neutralization reaction.

Acids + Bases Made Easy! Part 1 – What the Heck is an Acid or Base? – Organic Chemistry – YouTube: Ever wondered what the heck an Acid or Base actually is? Were you ever super confused in high school or college chemistry? In this video I introduce to you guys what the heck an Acid and Base really is forgetting the Lewis or Bronstead/Lowry definitions and then we’ll go more in depth in parts 2,3, and 4.

Recall the Arrhenius acid definition and its limitations.

An acid-base reaction is a chemical reaction that occurs between an acid and a base. Several concepts exist that provide alternative definitions for the reaction mechanisms involved and their application in solving related problems. Despite several differences in definitions, their importance as different methods of analysis becomes apparent when they are applied to acid-base reactions for gaseous or liquid species, or when acid or base character may be somewhat less apparent.

The Arrhenius definition of acid-base reactions, which was devised by Svante Arrhenius, is a development of the hydrogen theory of acids. It was used to provide a modern definition of acids and bases, and followed from Arrhenius’s work with Friedrich Wilhelm Ostwald in establishing the presence of ions in aqueous solution in 1884. This led to Arrhenius receiving the Nobel Prize in Chemistry in 1903.

As defined by Arrhenius:

Limitations of the Arrhenius Definition

An Arrhenius acid-base reaction is defined as the reaction of a proton and an hydroxide ion to form water:

Thus, an Arrhenius acid base reaction is simply a neutralization reaction.

Chemistry 12.1 What are Acids and Bases? (Part 1 of 2) – YouTube: This introduction to acids and bases discusses their general properties and explains the Arrhenius definitions for acids and bases.

The Brønsted-Lowry Definition of Acids and Bases

Originally, acids and bases were defined by Svante Arrhenius. His original definition stated that acids were compounds that increased the concentration of hydrogen ions (H+) in solution, whereas bases were compounds that increased the concentration of hydroxide ions (OH–) in solutions. Problems arise with this conceptualization because Arrhenius’s definition is limited to aqueous solutions, referring to the solvation of aqueous ions, and is therefore not inclusive of acids dissolved in organic solvents. To solve this problem, Johannes Nicolaus Brønsted and Thomas Martin Lowry, in 1923, both independently proposed an alternative definition of acids and bases. In this newer system, Brønsted-Lowry acids were defined as any molecule or ion that is capable of donating a hydrogen cation (proton, H+), whereas a Brønsted-Lowry base is a species with the ability to gain, or accept, a hydrogen cation. A wide range of compounds can be classified in the Brønsted-Lowry framework: mineral acids and derivatives such as sulfonates, carboxylic acids, amines, carbon acids, and many more.

Keep in mind that acids and bases must always react in pairs. This is because if a compound is to behave as an acid, donating its proton, then there must necessarily be a base present to accept that proton. The general scheme for a Brønsted-Lowry acid/base reaction can be visualized in the form:

Here, a conjugate base is the species that is left over after the Brønsted acid donates its proton. The conjugate acid is the species that is formed when the Brønsted base accepts a proton from the Brønsted acid. Therefore, according to the Brønsted-Lowry definition, an acid-base reaction is one in which a conjugate base and a conjugate acid are formed (note how this is different from the Arrhenius definition of an acid-base reaction, which is limited to the reaction of H+ with OH– to produce water). Lastly, note that the reaction can proceed in either the forward or the backward direction; in each case, the acid donates a proton to the base.

Consider the reaction between acetic acid and water:

Note that water is amphoteric; depending on the circumstances, it can act as either an acid or a base, either donating or accepting a proton. For instance, in the presence of ammonia, water will donate a proton and act as a Brønsted-Lowry acid:

Here, ammonia is the Brønsted-Lowry base. The conjugate acid formed in the reaction is the ammonium ion, and the conjugate base formed is hydroxide.

Water is capable of acting as either an acid or a base and can undergo self-ionization.

Explain the amphoteric properties of water.

Under standard conditions, water will self-ionize to a very small extent. The self-ionization of water refers to the reaction in which a water molecule donates one of its protons to a neighboring water molecule, either in pure water or in aqueous solution. The result is the formation of a hydroxide ion (OH–) and a hydronium ion (H3O+). The reaction can be written as follows:

This is an example of autoprotolysis (meaning “self-protonating”) and it exemplifies the amphoteric nature of water (ability to act as both an acid and a base ).

Autoprotolysis of water: The self-ionization of water produces hydronium and hydroxide ions in solution.

Note that the self-ionization of water is an equilibrium reaction:

Now, note the definition of pH and pOH:

If we plug in the above value into our equation for pH, we find that:

Here we have the reason why neutral water has a pH of 7.0; it represents the condition at which the concentrations of H+ and OH– are exactly equal in solution.

We have already established that the equilibrium constant KW can be expressed as:

If we take the negative logarithm of both sides of this equation, we get the following:

However, because we know that pKW = 14, we can establish the following relationship:

This relationship always holds true for any aqueous solution, regardless of its level of acidity or alkalinity. Utilizing this equation is a convenient way to quickly determine pOH from pH and vice versa, as well as to determine hydroxide concentration given hydrogen concentration, or vice versa.

The acid dissociation constant (Ka) is the measure of the strength of an acid in solution.

In the above reaction, HA (the generic acid), A– (the conjugate base of the acid), and H+ (the hydrogen ion or proton) are said to be in equilibrium when their concentrations do not change over time. As with all equilibrium constants, the value of Ka is determined by the concentrations (in mol/L) of each aqueous species at equilibrium. The Ka expression is as follows:

Acid dissociation constants are most often associated with weak acids, or acids that do not completely dissociate in solution. This is because strong acids are presumed to ionize completely in solution and therefore their Ka values are exceedingly large.

Due to the many orders of magnitude spanned by Ka values, a logarithmic measure of the acid dissociation constant is more commonly used in practice. The logarithmic constant (pKa) is equal to -log10(Ka).

The larger the value of pKa, the smaller the extent of dissociation. A weak acid has a pKa value in the approximate range of -2 to 12 in water. Acids with a pKa value of less than about -2 are said to be strong acids. A strong acid is almost completely dissociated in aqueous solution; it is dissociated to the extent that the concentration of the undissociated acid becomes undetectable. pKa values for strong acids can be estimated by theoretical means or by extrapolating from measurements in non-aqueous solvents with a smaller dissociation constant, such as acetonitrile and dimethylsulfoxide.

pOH and Other p Scales

A p-scale is a negative logarithmic scale.

Recall the reaction for the autoionization of water:

This reaction has a special equilibrium constant denoted KW, and it can be written as follows:

Because H+ and OH- dissociate in a one-to-one molar ratio,

If we take the negative logarithm of each concentration, we get:

Here we have the reason that neutral water has a pH of 7.0 -; this is the pH at which the concentrations of H+ and OH– are exactly equal.

Lastly, we should take note of the following relationship:

Generically, this p-notation can be used for other scales. In acid -base chemistry, the amount by which an acid or base dissociates to form H+ or OH– ions in solution is often given in terms of their dissociation constants (Ka or Kb). However, because these values are often very small for weak acids and weak bases, the p-scale is used to simplify these numbers and make them more convenient to work with. Quite often we will see the notation pKa or pKb, which refers to the negative logarithms of Ka or Kb, respectively.

Interactive: pH: Test the pH of things like coffee, spit, and soap to determine whether each is acidic, basic, or neutral. Visualize the relative number of hydroxide ions and hydronium ions in solution. Switch between logarithmic and linear scales. Investigate whether changing the volume or diluting with water affects the pH. Or you can design your own liquid!

pH and pOH: This lesson introduces the pH scale and discusses the relationship between pH, [H+], [OH-] and pOH.

Acids and Bases by Tulsa Community College is licensed under a Creative Commons Attribution 4.0 International License, except where otherwise noted.