Scientific notation is a way of writing numbers that are too big or too small in a convenient and standard form.

Scientific Notation: A Matter of Convenience

Scientific notation is a way of writing numbers that are too big or too small in a convenient and standard form. Scientific notation has a number of useful properties and is commonly used in calculators and by scientists, mathematicians and engineers.

In scientific notation, all numbers are written in the form of a x 10b(a multiplied by the power of ten raised to the power of b), where the exponent b is an integer and the coefficient a is any real number. 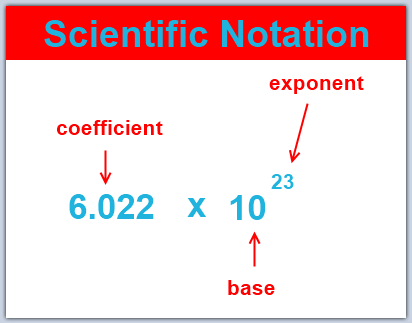 Scientific Notation: There are three parts to writing a number in scientific notation: the coefficient, the base, and the exponent.

Most of the interesting phenomena in our universe are not on the human scale. It would take about 1,000,000,000,000,000,000,000 bacteria to equal the mass of a human body. Thomas Young’s discovery that light was a wave preceded the use of scientific notation, and he was obliged to write that the time required for one vibration of the wave was “[latex]\displaystyle \frac{1}{500}[/latex] of a millionth of a millionth of a second”; an inconvenient way of expressing the point. Scientific notation is a less awkward and wordy way to write very large and very small numbers such as these.

Scientific notation means writing a number in terms of a product of something from 1 to 10 and something else that is a power of ten.

A round-off error is the difference between the calculated approximation of a number and its exact mathematical value.

Explain the impact round-off errors may have on calculations, and how to reduce this impact

A round-off error, also called a rounding error, is the difference between the calculated approximation of a number and its exact mathematical value. Numerical analysis specifically tries to estimate this error when using approximation equations, algorithms, or both, especially when using finitely many digits to represent real numbers. When a sequence of calculations subject to rounding errors is made, errors may accumulate, sometimes dominating the calculation.

Calculations rarely lead to whole numbers. As such, values are expressed in the form of a decimal with infinite digits. The more digits that are used, the more accurate the calculations will be upon completion. Using a slew of digits in multiple calculations, however, is often unfeasible if calculating by hand and can lead to much more human error when keeping track of so many digits. To make calculations much easier, the results are often ’rounded off’ to the nearest few decimal places.

For example, the equation for finding the area of a circle is [latex]\text{A} = \pi \text{r}^2[/latex]. The number [latex]\pi[/latex] (pi) has infinitely many digits, but can be truncated to a rounded representation of as 3.14159265359. However, for the convenience of performing calculations by hand, this number is typically rounded even further, to the nearest two decimal places, giving just 3.14. Though this technically decreases the accuracy of the calculations, the value derived is typically ‘close enough’ for most estimation purposes.

However, when doing a series of calculations, numbers are rounded off at each subsequent step. This leads to an accumulation of errors, and if profound enough, can misrepresent calculated values and lead to miscalculations and mistakes.

The following is an example of round-off error:

Rounding these numbers off to one decimal place or to the nearest whole number would change the answer to 5.7 and 6, respectively. The more rounding off that is done, the more errors are introduced.

An order of magnitude is the class of scale of any amount in which each class contains values of a fixed ratio to the class preceding it.

An order of magnitude is the class of scale of any amount in which each class contains values of a fixed ratio to the class preceding it. In its most common usage, the amount scaled is 10, and the scale is the exponent applied to this amount (therefore, to be an order of magnitude greater is to be 10 times, or 10 to the power of 1, greater). Such differences in order of magnitude can be measured on the logarithmic scale in “decades,” or factors of ten. It is common among scientists and technologists to say that a parameter whose value is not accurately known or is known only within a range is “on the order of” some value. The order of magnitude of a physical quantity is its magnitude in powers of ten when the physical quantity is expressed in powers of ten with one digit to the left of the decimal.

It is important in the field of science that estimates be at least in the right ballpark. In many situations, it is often sufficient for an estimate to be within an order of magnitude of the value in question. Although making order-of-magnitude estimates seems simple and natural to experienced scientists, it may be completely unfamiliar to the less experienced.

Some of the mental steps of estimating in orders of magnitude are illustrated in answering the following example question: Roughly what percentage of the price of a tomato comes from the cost of transporting it in a truck? 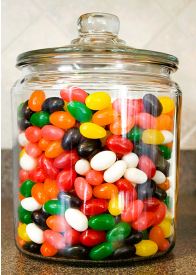 Guessing the Number of Jelly Beans: Can you guess how many jelly beans are in the jar? If you try to guess directly, you will almost certainly underestimate. The right way to do it is to estimate the linear dimensions and then estimate the volume indirectly.

Incorrect solution: Let’s say the trucker needs to make a proﬁt on the trip. Taking into account her beniﬁts, the cost of gas, and maintenance and payments on the truck, let’s say the total cost is more like 2000. You might guess about 5000 tomatoes would ﬁt in the back of the truck, so the extra cost per tomato is 40 cents. That means the cost of transporting one tomato is comparable to the cost of the tomato itself.

The problem here is that the human brain is not very good at estimating area or volume — it turns out the estimate of 5000 tomatoes fitting in the truck is way off. (This is why people have a hard time in volume-estimation contests, such as the one shown below.) When estimating area or volume, you are much better off estimating linear dimensions and computing the volume from there.

Physical Science by Tulsa Community College is licensed under a Creative Commons Attribution-ShareAlike 4.0 International License, except where otherwise noted.