Probability is the branch of mathematics that deals with the likelihood that certain outcomes will occur. There are five basic rules, or axioms, that one must understand while studying the fundamentals of probability.

experiment
Something that is done that produces measurable results, called outcomes.
outcome
One of the individual results that can occur in an experiment.
event
A subset of the sample space.
sample space
The set of all outcomes of an experiment.

For example, consider the experiment of flipping a coin two times. There are four individual outcomes, namely HH,HT,TH,TT. The sample space is thus {HH,HT,TH,TT}. The event “at least one heads occurs” would be the set {HH,HT,TH}. If the coin were a normal coin, we would assign the probability of 1/4 to each outcome.

In probability theory, the probability P of some event E, denoted P(E), is usually defined in such a way that P satisfies a number of axioms, or rules. The most basic and most important rules are listed below.

The sum of the probabilities of all possibilities must equal 1. Some outcome must occur on every trial, and the sum of all probabilities is 100%, or in this case, 1. This can be written as P(S)=1, where S represents the entire sample space.

Extension of the Example

Dice are often used when learning the rules of probability.

Elaborating on our example above of flipping two coins, assign the probability 1/4 to each of the 4 outcomes. We consider each of the five rules above in the context of this example.

The conditional probability of an event is the probability that an event will occur given that another event has occurred.

Explain the significance of Bayes’ theorem in manipulating conditional probabilities

conditional probability
The probability that an event will take place given the restrictive assumption that another event has taken place, or that a combination of other events has taken place
independent
Not dependent; not contingent or depending on something else; free.

Probability of B Given That A Has Occurred

The conditional probability P(B∣A) of an event B, given an event A, is defined by:

When P(A)>0. Be sure to remember the distinct roles of B and A in this formula. The set after the bar is the one we are assuming has occurred, and its probability occurs in the denominator of the formula.

Suppose that a coin is flipped 3 times giving the sample space:

In probability theory and statistics, Bayes’ theorem (alternatively Bayes’ law or Bayes’ rule) is a result that is of importance in the mathematical manipulation of conditional probabilities. It can be derived from the basic axioms of probability.

This may be easier to remember in this alternate symmetric form:

Suppose someone told you they had a nice conversation with someone on the train. Not knowing anything else about this conversation, the probability that they were speaking to a woman is 50%. Now suppose they also told you that this person had long hair. It is now more likely they were speaking to a woman, since women in in this city are more likely to have long hair than men. Bayes’s theorem can be used to calculate the probability that the person is a woman.

Suppose it is also known that 75% of women in this city have long hair, which we denote as P(L∣W)=0.75. Likewise, suppose it is known that 25% of men in this city have long hair, or P(L∣M)=0.25, where M is the complementary event of W, i.e., the event that the conversation was held with a man (assuming that every human is either a man or a woman).

Our goal is to calculate the probability that the conversation was held with a woman, given the fact that the person had long hair, or, in our notation, P(W∣L). Using the formula for Bayes’s theorem, we have:

Union and intersection are two key concepts in set theory and probability.

independent
Not contingent or dependent on something else.
disjoint
Having no members in common; having an intersection equal to the empty set.

Probability uses the mathematical ideas of sets, as we have seen in the definition of both the sample space of an experiment and in the definition of an event. In order to perform basic probability calculations, we need to review the ideas from set theory related to the set operations of union, intersection, and complement.

The union of two or more sets is the set that contains all the elements of each of the sets; an element is in the union if it belongs to at least one of the sets. The symbol for union is ∪, and is associated with the word “or”, because A∪B is the set of all elements that are in A or B (or both.) To find the union of two sets, list the elements that are in either (or both) sets. In terms of a Venn Diagram, the union of sets A and B can be shown as two completely shaded interlocking circles. 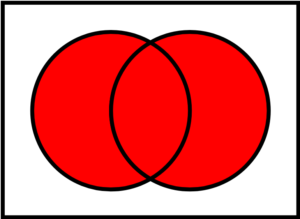 Union of Two Sets: The shaded Venn Diagram shows the union of set A (the circle on left) with set B (the circle on the right). It can be written shorthand as A∪B.

In symbols, since the union of A and B contains all the points that are in A or B or both, the definition of the union is:

Where P(A∩B) is the intersection of the two sets. We must subtract this out to avoid double counting of the inclusion of an element.

If sets A and B are disjoint, however, the event A∩B has no outcomes in it, and is an empty set denoted as ∅, which has a probability of zero. So, the above rule can be shortened for disjoint sets only:

This can even be extended to more sets if they are all disjoint: 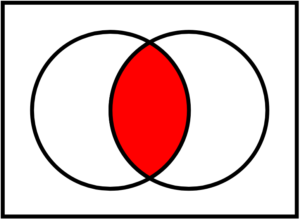 The complement of A is the event in which A does not occur.

Explain an example of a complementary event

What are Complementary Events?

A common example used to demonstrate complementary events is the flip of a coin. Let’s say a coin is flipped and one assumes it cannot land on its edge. It can either land on heads or on tails. There are no other possibilities (exhaustive), and both events cannot occur at the same time (mutually exclusive). Because these two events are complementary, we know that P(heads) + P(tails)=1. 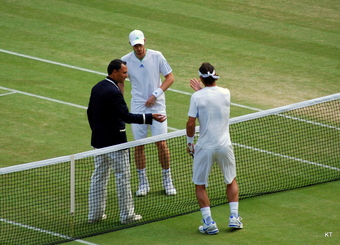 Often in sports games, such as tennis, a coin flip is used to determine who will serve first because heads and tails are complementary events.

Another simple example of complementary events is picking a ball out of a bag. Let’s say there are three plastic balls in a bag. One is blue and two are red. Assuming that each ball has an equal chance of being pulled out of the bag, we know that P(blue)=1/3 and P(red)=2/3. Since we can only either chose blue or red (exhaustive) and we cannot choose both at the same time (mutually exclusive), choosing blue and choosing red are complementary events, and P(blue)+P(red)=1.

Finally, let’s examine a non-example of complementary events. If you were asked to choose any number, you might think that that number could either be prime or composite. Clearly, a number cannot be both prime and composite, so that takes care of the mutually exclusive property. However, being prime or being composite are not exhaustive because the number 1 in mathematics is designated as “unique. ”