[1]The Purpose of Comparison and Contrast in Writing

The key to a good compare-and-contrast essay is to choose two or more subjects that connect in a meaningful way. The purpose of comparing or contrasting two items/ideas is not to state the obvious but rather to illuminate subtle differences or unexpected similarities. For example, if you wanted to focus on contrasting two items you would not pick English and math; rather, you might choose to compare and contrast two styles of English (academic writing and creative writing) or math (calculus and college algebra) to highlight subtle differences. For example, academic writing depends on developing a foundation of argument based on research and logic, while creative writing has a foundation developed on things like characters, plots, and world-building. Drawing distinctions between elements in a similar category will increase the audience’s understanding of that category, which is the purpose of the compare-and-contrast essay.

Similarly, to focus on comparison, choose two subjects that seem at first to be unrelated. For a comparison essay, you likely would not choose two types of writing styles or two fields of math because they share so many of the same properties already. Rather, you might try to compare how English and math are quite similar. The more divergent the two subjects initially seem the more interesting a comparison essay will be.

Brainstorm an essay that leans toward contrast. Choose one of the following three categories. Pick two examples from each. Then come up with one similarity and three differences between the examples.

Brainstorm an essay that leans toward comparison. Choose one of the following three items. Then come up with one difference and three similarities.

The Structure of a Comparison and Contrast Essay

The compare-and-contrast essay starts with a thesis that clearly states the two subjects that are to be compared, contrasted, or both and the reason for doing so. The thesis could lean more toward comparing, contrasting, or both. Remember, the point of comparing and contrasting is to provide useful knowledge to the reader. Take the following thesis as an example that leans more toward contrasting.

Thesis statement: Organic vegetables may cost more than those that are conventionally grown, but when put to the test, they are definitely worth every extra penny.

Here the thesis sets up the two subjects to be compared and contrasted (organic versus conventional vegetables), and it makes a claim about the results that might prove useful to the reader.

You may organize compare-and-contrast essays in one of the following two ways:

See Figure 2.8.1 “Comparison and Contrast Diagram”, which diagrams the potential ways to organize a paper using the organic versus conventional vegetable thesis. 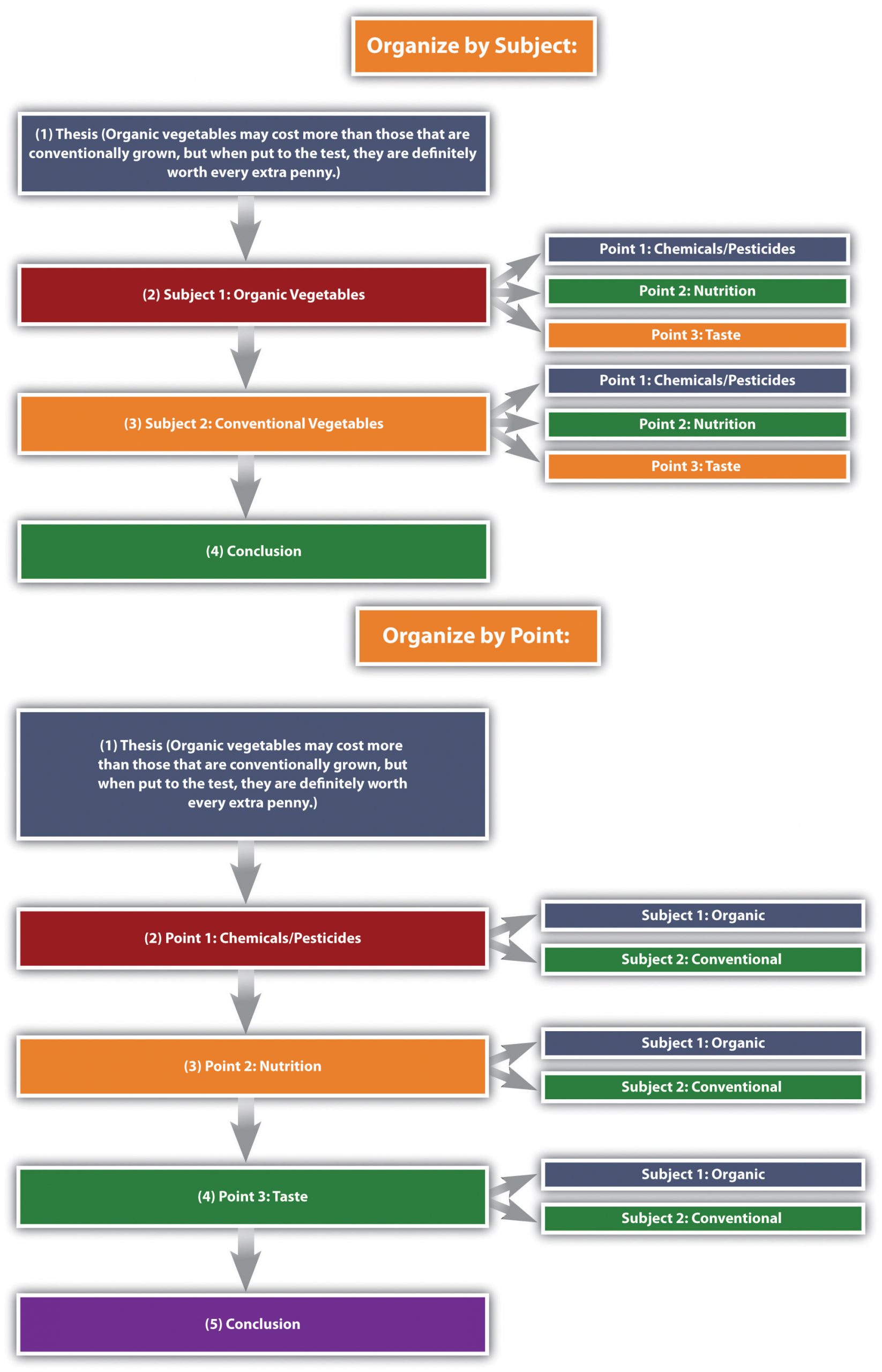 The organizational structure you choose depends on the nature of the topic, your purpose, and your audience.

Given that compare-and-contrast essays analyze the relationship between two subjects, it is helpful to have some phrases on hand that will cue the reader to such analysis. See Table 2.8.2 “Phrases of Comparison and Contrast” for examples.

Table 2.8.2 Phrases of Comparison and Contrast

Share your plans with a peer. Are there flaws? Is one syle of organization clearer than the other? What aspects about the organization are clearest?

Writing a Comparison and Contrast Essay

First choose whether you want to compare seemingly disparate subjects, contrast seemingly similar subjects, or compare and contrast subjects. Once you have decided on a topic, introduce it with an engaging opening paragraph. Your thesis should come at the end of the introduction, and it should establish the subjects you will compare, contrast, or both as well as state what can be learned from doing so.

The body of the essay can be organized in one of two ways: by subject or by individual points. The organizing strategy that you choose will depend on, as always, your audience and your purpose. You may also consider your particular approach to the subjects as well as the nature of the subjects themselves; some subjects might better lend themselves to one structure or the other. Make sure to use comparison and contrast phrases to cue the reader to the ways in which you are analyzing the relationship between the subjects.

After you finish analyzing the subjects, write a conclusion that connects the main points of the essay and reinforces your thesis.

Many business presentations are conducted using comparison and contrast. The organizing strategies—by subject or individual points—could also be used for organizing a presentation. Keep this in mind as a way of organizing your content the next time you or a colleague have to present something at work.

Composition 1: Introduction to Academic Writing by Brittany Seay is licensed under a Creative Commons Attribution-NonCommercial-ShareAlike 4.0 International License, except where otherwise noted.